How to Get Dual Fiend Hunters in Fortnite

Do you want to get Dual Fiend Hunters in Fortnite?

Epic Games’ Fortnite Battle Royale has gone through many changes over the previous seasons. For online games to stay relevant, it needs new content from time to time, and Fortnite never fails its fans.

Fortnite’s Season 8 update will be all about the war against Cube Monsters. If you thought the Alien Mothership was bad, these new enemies are much worse.

However, you don’t have to worry about fighting them off as Epic Games added more looting locations in Fortnite Island. While spawn rates of chests remain low, there are more of them on the map.

Besides that, there’s also the Dual Fiend Hunters, which should help you fight off aliens faster and easier.

For today’s guide, we’ll show you how to get the Dual Fiend Hunters in Fortnite Battle Royale.

What Are Dual Fiend Hunters?

Dual Fiend Hunters are a dual-wield crossbow based on a weapon from the previous Fortnitemares: Fiend Hunters Crossbow. It worked the same way as a standard crossbow but lacked scope and had a larger magazine.

However, the Dual Fiend Hunters are an upgrade from the original crossbow when it comes to functionality and versatility.

Compared to the rare Fiend Hunter Crossbow, these dual crossbows can be found in chests and as ground loot. Yes, you’ve read that right. These babies are easy to come by across Fortnite Island.

They appear in variants though ranging from Uncommon to Legendary, and make a good weapon when exploring the Sideways Areas.

However, keep in mind that higher versions of Dual Fiend Hunters are harder to locate.

Unfortunately, the Dual Fiend Hunters won’t come with unlimited ammo. While they shine the most when eliminating Cube Monsters, they now require medium ammo.

If you’re looking for a decent replacement for Burst Assault Rifles in the Sideways Zone, the Dual Fiend Hunters is the way to go.

The Dual Fiend Hunters fire semi-automatically, with both barrels firing once each button press. Compared to other crossbows, they are hitscan, and players will have to adjust for projectile speed and drop when using it.

They are also designed for Sideways Monsters and deal twice the typical damage to them.

That brings us to the end of our guide on where to get Dual Fiend Hunters in Fortnite. If you have questions, don’t hesitate to leave a comment below, and we’ll do our best to answer them.

How to Destroy Sideways Rocks in Fortnite

How to Gain MMR with Pudge in Dota 2

How to Farm Effectively as a Carry in Dota 2

Farming efficiently is an art that every carry player should be well-versed in. That being said, farming in…
byUzair Khan

How to Play Teemo in League of Legends

How to Get the Stun Gun in GTA Online 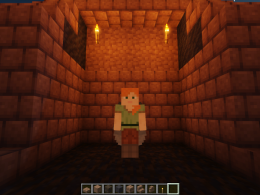 How to Make Mud Bricks in Minecraft

Do you know how to make Mud Bricks in Minecraft and make your builds more interesting? Minecraft adds…
byUzair Khan