How to Change Villager Jobs in Minecraft

Do you know how to change Villager jobs in Minecraft and start trading to get unique items?

Villagers are passive mobs that don’t attack anyone even if someone hits them. Instead of hitting back, Villagers tend to run away or hide in their houses. While they aren’t big fighters, Villagers sure know how to do other things like farm, breed, and interact with each other. Moreover, Villagers can even trade with the player depending on their jobs.

Villagers have the same model, so they look the same except for their outfits, that change depending on two factors. First is the biome they are in. For example, Villagers in snow biomes have different clothing than Villagers in the Plains biome. The second factor is their profession, like being a Farmer, Mason, or even a Cleric.

An average Villager with no specific job has the same basic movement pattern throughout the day. For instance, in the daytime, Villagers move out of their homes and begin to roam around the Village. However, they don’t wander far away from this place. This cycle repeats until night comes, after which the Villagers move back into their homes.

Throughout the day, Villagers may interact by looking at one another or starting at the player. Like other baby mobs in the game, there are Baby Villagers who can jump on Beds and play with each other. Aside from this, there are Farmer Villagers who take care of the crops and actively take out plants and reseed the ground.

The main currency of Villagers is Emeralds, rare green stones found deep underground. Players can use Emeralds to trade with Villagers to get rare items like Enchanted armor and books. While trading is straightforward, changing the Villager’s job isn’t. Fortunately, below is how to change Villager jobs in Minecraft.

The first step of knowing how to change Villager jobs in Minecraft is to understand what types of jobs are there. There are more than ten jobs a Villager can take, each requiring a different block. In particular, Villagers require multiple things to take up a job. To start changing the Villager job, first, listed below are the types of jobs available.

Armorer is an extremely important Villager in Minecraft because of their incredible trades. Firstly, they give Chainmail armor in earlier trades with the player. After they level up multiple times, they start giving Enchanted Diamond Armor, which has various enchantments. Their work block is the Blast Furnace which is an upgraded Furnace.

Clerics are like Minecraft Witches but better because they have awesome trades and don’t throw random potions at the player. For example, they give Ender Pearls, Glowstone Dust, Redstone Dust, and different potions as they level up by trading. The work block for Clerics is a Brewing Stand which is also the main tool to craft potions in Minecraft.

Librarians are the most important Villagers in Minecraft for all the right reasons. Firstly, these are one of the sources to get the Mending enchanted book in Minecraft, which is extremely useful and rare. Secondly, they also give Name Tags which are also rare items. The job block for these villagers is the Lecturn, made from a Bookshelf and Slabs.

Weaponsmith, similar to the Armorer, is also an important Villager that trades enchanted weapons instead of armor. For example, players can get rare enchanted Diamond Swords when they level up these Villagers. Unlike this Armorer, the job block for this Villager is the Grindstone. Players can craft this block with Sticks, Planks, and a Stone Slab.

The Fletcher is a unique Villager because players use it to farm Emeralds while its trades aren’t as useful. In particular, the Fletcher trades Sticks for Emeralds, so players can limitlessly trade Sticks for loads of Emeralds. This allows the player to collect Emeralds to trade with other Villagers. Fletching Table is the job block for these Villagers.

There are other jobs in Minecraft available for Villagers, but these aren’t as popular or useful because of their trades. For instance, Villagers can become Butchers, Cartographers, Farmers, Fishermen, and Leatherworkers, but none have very good trades. For this reason, the aforementioned jobs are the most popular among players.

How to Change Villager Jobs

There are multiple steps to change a Villager’s job in Minecraft. Players must carefully follow these and ensure everything goes smoothly, or the Villagers will not change jobs. For this reason, below is the complete procedure for changing Villagers’ jobs in Minecraft. The first step is finding a Village with alive Villagers, which is obvious.

The most common biomes for finding Villages are the Plains, Snow, or Desert biomes. After finding a Biome, next, the player needs to find a Villager with no job. On the other hand, the player can also break a job block to unemploy a Villager. Whatever the player chooses, ensure that the Villager has no job and cannot escape.

The player needs to trap the Villager in a large box to house a Villager, a job block, and a Bed. After trapping the Villager, place the Bed and the specific job block in the box. After some time, the Villager will give off green particles and change clothes, signifying a job change.

Minecraft is full of mystery and different aspects that make the game more interesting. Trading is one element that helps the player progress in his adventure. Hopefully, this guide on how to change Villager jobs in Minecraft will help you get the required trade.

Author
Uzair Khan
I am a business student who loves to write and play games as a hobby. Combining the two allows me to write about games like Dota 2, Call of Duty Warzone and Minecraft.

Marksman Rifles are the most versatile weapons in Call of Duty Warzone. They slightly feel like sniper rifles…
byUzair Khan

Looking for the best early mods you can try out for Dinkum? Dinkum is a farm life simulation…
byJohn Sixto 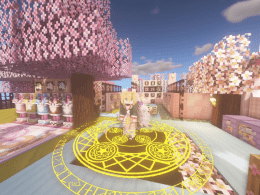 Are you looking for the best Minecraft anime texture packs?  Minecraft has been out for a couple of…
byJohn Sixto