Morphling is a hero that has both the characteristics of an Agility and Strength hero. He can casually switch between the two categories, either increasing his attack speed or enlarging his HP Pool. Based on the circumstances, Morphling can adapt to the situation and respond accordingly. However, in this game, every hero has a counter. Similarly, there are heroes that can be played as Morphling Counters in Dota 2.

Despite how tough he may look in your pub games, this hero has several counters. Once you understand how they counter Morphling, your games will become easier.

Here’s a list of the best Morphling Counters in Dota 2.

Morphling is an agility-based ranged hero who can switch his attributes to that of a strength hero. He is a tricky hero to kill due to his high adaptability and flexible skillset. The easiest way to kill this hero is to disable him with stuns and silences. This requires a coordinated team effort.

After building the ethereal blade, Morphling can burst enemy heroes down using Adaptive Strike (Agility). Not only does he have a variety of abilities, but he can also kill heroes by right-clicking them thanks to his high agility stats.

The Attribute Shift (Agility Gain) allows him considerable attack speed that can easily take down heroes. His Waveform allows him to escape ganks or close the gap with enemy heroes quickly. Making Morphling counters in Dota 2 that much more important.

All in all, Morphling is a very hard hero to deal with when being played by an experienced player. Knowing how to deal with him in your games will help you save your MMR.

If not properly countered during the selection phase of the game, Morphling can easily dominate the Mid-game using his ethereal blade and then snowball that into the late game. Therefore, try playing these counters if you want to counter Morphling and stop him from stomping your team.

Morphling’s attribute shift is tough to counter unless you get the jump on him or surprise him. On the other hand, Ancient Apparition can use Ice Blast to stop Morphling from healing using Attribute Shift (Strength Gain). Since Morphling won’t be healing, he can be easy to kill as he has low HP during his Agility Morph.

Morphling can still escape using his Waveform, so your positioning needs to be tight. It’s better to have a lane partner with you when ganking him. Ice Vortex also reduces Morphling’s speed down to the bare minimum, making him barely movable. Combining both these moves allows for an easy kill on Morphling.

Skywrath Mage is a natural counter to Morphling. His ability to silence heroes while having them take additional magic damage can be fatal. Since Morphling cannot convert to his Strength attribute when silenced, the Skywrath mage can simply chase him down with superior movement speed. His high-damage spells allow him to kill Morphling quickly.

If you have bought a Rod of Atos, Skywrath Mage can use Arcane Bolt to disable Linken Sphere before rooting Morphling and killing him with the Mystic Flare. However, should Morphling get the jump on Skywrath Mage, he can use Morph to silence him and burst him down.

Anti-Mage is a strong counter to most intelligence-based heroes. His Counterspell bonus magic resistance allows him to withstand most attacks. Similarly, Morphling’s Ethereal Blade damage will not affect Anti-Mage and will deal less damage than usual.

If timed right, Anti-Mage could reflect the Ethereal Blast and Adaptive strike combo to Morphling. Which, in most cases, would easily kill him. Pair that with Mana Break, and Manta Style to burn away Morphling’s mana and there is not much he can do against Anti-Mage.

Even using Waveform to escape is useless since Anti-Mage can easily blink to Morphling and can continue attacking him.

Morphling does not have an AoE damage to clear out waves. He utilizes his single target abilities to kill heroes. This is not effective against Chaos Knight’s Phantasm which means, Morphling will have a hard time killing Chaos Knight or his Illusions at once.

If Chaos Knight gets a long stun off of his Chaos Bolt, he can deliver a high damage output with Reality Rift and takedown Morphling before he has a chance to shift Attributes.

A common item for Chaos Knight to buy is the Bloodthorn. This can silence Morphling for a good five seconds, which can have Morphling disabled for up to ten seconds when timed with the Chaos Bolt. However, this only works during the Mid game as Morphling may be saved by Linken Sphere or Manta Style in the late game.

Outworld Devourer is a great right-click hero who deals massive amounts of damage. Using his Arcane Orb’s pure damage, he can bypass Morphling’s high armor and kill him quickly. Additionally, he can imprison him in Astral Prison, stopping him from shifting attributes, then use Sanity Eclipse to burst Morphling down before he can heal himself.

Outworld Devourer, however, has no silence or root ability to stop Morphling from Escaping using his Waveform. He will have to rely on allies to disable Morphling before he can kill him using his abilities.

Much like Chaos Knight, Phantom Lancer can overpower Morphling with his illusions. With no way to deal with them, Morphling is vulnerable to their attacks. Since Phantom Lancer also carries Diffusal Blade, these illusions can quickly burn through Morphling’s mana, stopping him from using his abilities like Waveform to escape.

Ethereal Blast can be negated using Doppelganger and can be used to dodge Morphling’s Adaptive Strike when timed correctly. Meaning that Morphling has no way of dealing with Phantom Lancer.

In the late game, Phantom Lancer becomes even more of a threat to Morphling as he can buy Eye of Skadi to slow down Morphling and stop him from gaining health using Attribute Shift (Strength Gain).

Morphling relies on his high attack speed and right-clicks damage to take down buildings. Arc Warden can use Magnetic Field to protect these buildings, rendering Morphling’s attacks useless.

Rubick is a great hero whose ultimate allows him to steal other heroes’ moves. Using this, Rubick can steal Attribute Shift (Strength Gain) from Morphling and utilize it. The best thing about this is that even after Rubick steals another move, the attributes will remain. Making Rubick a very hard hero to deal with for Morphling.

Stealing Adaptive Strike also gives him an incredible three-second stun. This stun can be fatal for Morphling. Stealing Waveform allows Rubick to have a powerful nuke and escape ability in his arsenal.

In conclusion, Rubick can steal any of Morphling’s abilities and come out ahead. Whether it’s the stun, the Attribute Shift or Wave Form. They all help Rubick kill Morphling when used right.

Mirana is a hero who needs to have good game sense to land her stun. If she manages to have Morphling hit by Sacred Arrow, then he will be stunned for a long duration. During this, he can be easily ganked or killed.

A common item Mirana buys is the Linken Sphere. This makes it hard to kill her by nuking her with Ethereal Blast and Adaptive Strike. Her Moonlight shadow also allows her team to surprise gank Morphling and potentially kill him.

However, if Morphling manages to Morph into Mirana, he can use Leap to jump and escape away. Therefore, it’s best to be careful or land your Sacred Arrow before jumping to kill him.

Morphling is a very strong hero who is not easy to kill unless you have a specific draft or itemization. Hopefully, this article will help you pick the right heroes and use their abilities as Morphling counters in Dota 2. Utilizing quick tactics and a strong game sense is important when dealing with such a powerful hero.

Author
Uzair Khan
I am a business student who loves to write and play games as a hobby. Combining the two allows me to write about games like Dota 2, The Witcher and Pokémon Go.

How to Beat Balnazzar in World of Warcraft

How to Beat Magtheridon in World of Warcraft 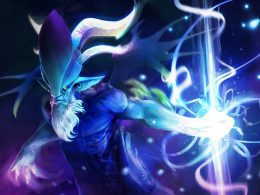 The recent 7.28 patch brought with it a new item along with several other changes. This new item…
byUzair Khan

How to Play Witch Doctor in Dota 2

The Witch Doctor in Dota 2 is a ranged support hero. He belongs to the intelligence heroes category…
byUzair Khan