Do you want to know the best EBR-14 Loadout in Call of Duty Warzone?

One of the most potent classes of weapon in Warzone is the Marksman Rifle.  Marksman rifles may be of use as long-range semi-automatic rifles that can shred armor or as sniper rifles. One of these is the EBR-14, which is quite a well-balanced gun. However, it is useless without knowing what the Best EBR-14 loadout in Call of Duty Warzone is.

The EBR-14 is a semi-automatic marksman rifle that fires 10 rounds of 7.62 NATO ammo. It is best when one uses it for long-range battles and extensive engagements. Moreover, the correct attachments may be of use to enhance practically any feature of the weapon. As a result, all should know the best EBR-14 loadout in Call of Duty Warzone.

The best EBR-14 loadout in Call of Duty Warzone increases the gun’s overall damage range. It also improves accuracy and recoil control, which makes this weapon perfect for long-range fighting. Furthermore, the following attachments can increase its damage range as well. Overall, with customizing, the EBR-14 can become an absolute beast.

Many are unaware of just how much recoil a Marksman rifle has, and thus the correct attachment is important. Because of this, the perfect muzzle for this gun is the Muzzle Brake. The Muzzle Brake increases recoil stabilization and, thus, allows players to shoot with higher accuracy. Though, one disadvantage is that it reduces aiming stability.

Another attachment that increases recoil control much further is the FORGE TAC Precision 22.0. This barrel also improves bullet velocity, aiding players in getting kills on enemies that are far away. Besides this, it increases the damage range, helping transform the EBR-14 from a Marksman into a sniper rifle.

Since Ranger Foregrip offers so many advantages, it is essential for this setup to function. First of all, it enhances recoil management, enabling the player to keep control of the rifle. Additionally, it improves aiming stability, allowing players to continue shooting adversaries while aiming. However, it does decrease the aim walking movement speed.

Helping the EBR-14 and players get more kills from far away is the role of the optic. Consequently, the 4.0x Flip Hybrid is ideal, as it helps players spot enemies that are long distances away. It also has a manual toggle between Holo and Scouts; thus, one can fight in mid-range engagements.

The EBR-14 is an extremely viable weapon for long-range engagements, but it is not perfect. Because of this, it needs support in close-range encounters where it is less potent. As a result, a secondary weapon is compulsory to complete the best EBR-14 loadout in Call of Duty Warzone. The best gun for this job is an SMG like the MW MP5.

The MP5 is one of Call of Duty: Warzone’s older weapons and is well-known for the right reasons. It possesses a quick rate of fire and an excellent, effective damage range. Even while it is a fantastic weapon on its own, the right attachments raise its damage stats even higher. Moreover, as an SMG, it is extremely good at fights in point-blank ranges.

For the Modern Warfare MP5 in Call of Duty Warzone, the ideal barrel attachment is the Monolithic Integral Suppressor. This barrel increases bullet velocity, which raises the MP5’s capability for long-range damage, making it much more potent. Additionally, it offers sound suppression, which hides the player’s location and stops opponent ganks.

Though the Monolithic Suppressor decreases the ADS Speed, the next attachment counteracts this effect. The FTAC Collapsible increases the ADS speed by a large margin, making it even better at getting kills. Moreover, it also increases the overall mobility of players. This assists one in helping bamboozle enemies by advancing their movement.

The next attachment is extremely crucial in making the MW MP5 even better at close quarters. It achieves this by using the 5mW Laser, which improves the gun’s hip fire rate. It enhances the MP5’s ability to run and gun, enabling users to effortlessly kill foes while dodging their shots. Lastly, it also grants players the opportunity to balance one’s arsenal.

Next is the Merc Foregrip, another attachment that enhances the MW MP5’s effectiveness. Firstly, as an SMG, the MW MP5 has quite a high recoil, thus, the Merc Foregrip aids in controlling it. Furthermore, it increases the hip fire accuracy even further, allowing players to destroy enemies without difficulty.

Lastly, an essential part of completing one’s ideal MW MP5 loadout as a secondary weapon for the EBR-14. This part is the 45 Round Mags, the type of ammunition it uses. Increasing the clip size to a ridiculous 45 bullets allows a player to easily wipe entire teams. It also makes it much more useful at hip firing in close quarters.

Although weapons are necessary for a loadout, they are not the sole components that make a loadout effective. Particularly, the equipment and perks may make or break a game, therefore it’s important to choose them properly. The greatest perks and gear for the best EBR-14 loadout in Call of Duty Warzone are therefore mentioned here.

The primary reason this loadout is so potent is Perk 2, Overkill. The main goal of the loadout is to make it possible to employ two primary weapons at once. This calls for Overkill, which enables the player to have two main weapons equipped at once. Because of this, one can create a highly lucrative arsenal with good balance and damage output.

For this loadout, the Sleight of Hand is essential for many reasons. This perk increases the reloading speed in particular. As a result, the player may engage in battle without worrying about reloading their magazines. For both the large 45-round magazine for the MW MP5 and the EBR-14, this is crucial for success.

The third bonus, Combat Scout, is particularly effective when used with weapons like the MK2 that have broad damage arcs. The player may tag enemies with it after successfully hitting them. As long as one consistently tags foes, the perk will show their position. This perk is among the best available for Marksman weapons because of its potency.

One aims to play much more passively with the EBR-14, so having a Claymore is essential. It assists one in keeping their defenses secure when aiming down sights for long-range elimination. The tactical, on the other hand, comes in handy when in dubious situations. The Heartbeat Sensor is excellent for looking behind corners while you are moving.

The EBR-14 is highly practical and offers a tonne of benefits. Some of its many advantages include tremendous damage, exceptional precision, and a wide range. It also helps one’s team gain a long-range marksman who can scout long distances. By using the Best EBR-14 Loadout in Call of Duty Warzone, one can master this weapon.

Author
Uzair Khan
I am a business student who loves to write and play games as a hobby. Combining the two allows me to write about games like Dota 2, Call of Duty Warzone and Minecraft.

How to Change Skins for Characters in Vampire Survivors 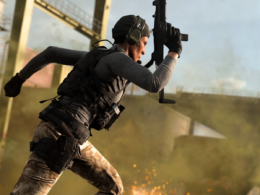 Many unique weapons available in the game can enhance your gameplay if you make a loadout with them.…
byUzair Khan

Do you want to know the best MW MP5 Loadout in Call of Duty Warzone? SMGs are currently…
byUzair Khan